In its final year of operation, a NIRAS-implemented challenge fund has attracted significant investment in the off-grid electric power sector

Hyppolite Trekourboko is a primary school teacher at Hevié Adovié in Calavi, Benin. Last year, he purchased a solar kit from ARESS, a local business that sells and installs solar-powered systems using the pay-as-you-go model. The kit, which comprises a television, strong flashlight, small radio and five bulbs, has been life-changing for Hyppolite and his family.

“The area where we live is sparsely populated. Currently, there are a few more people, but before it was the bush everywhere. Already at 7 pm, you were afraid to come home because of the darkness. Everyone would go to bed at 8 pm. Even communication was difficult as cell phones were regularly switched off, and after three or four days, we had to go to the city to charge. So even for emergencies, we were unreachable,” Hyppolite explains. [The solar kit] allows me to light up the house, prepare my teaching notes and study with the children who come to the house for after-school tutoring ... The kit also allows my wife to sell produce at night. Before we just had lanterns. This kit has really helped.” 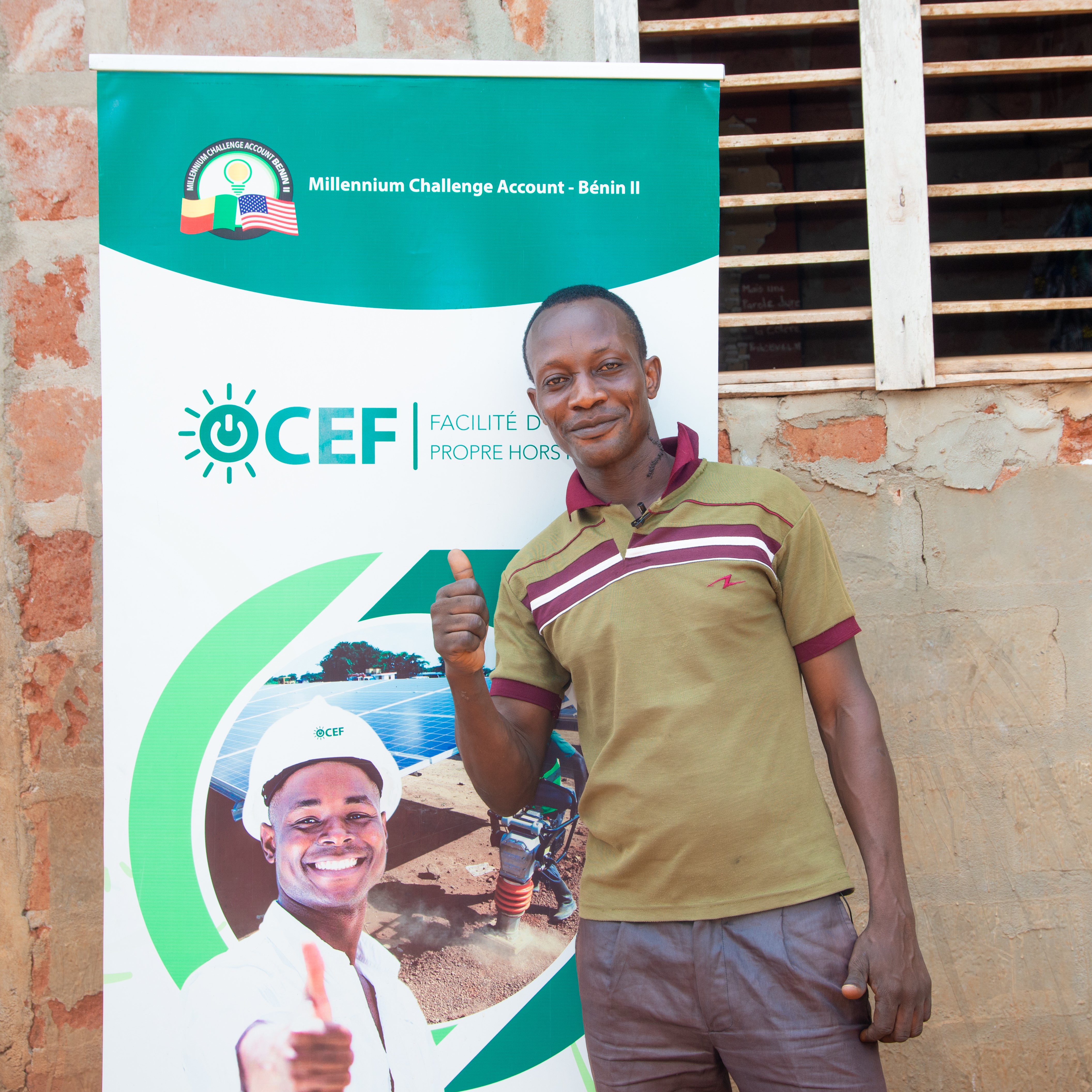 Hyppolite is one of the lucky ones. According to the 2021 Energy Progress report Tracking SDG7, in 2019 an incredible 60% of Benin’s citizens still had no access to electricity. His solar kit is one of close to 12,400 that have been distributed in the last four years through the Off-grid Clean Energy Facility (OCEF), a 5-year US$32 million Challenge Fund, created by the Millennium Challenge Corporation as part of its Benin Power Compact initiative. The OCEF was just awarded an extension until June 2023.

To date, the Facility which NIRAS manages has had two calls for proposals and is co-financing 16 commercial pilot projects to bring energy to those not connected to the national electricity grid. ARESS, the vendor of Hyppolite’s kit, is one of six solar-power household energy system suppliers receiving support from OCEF. Companies are encouraged to provide affordable financing terms and convenient payment systems. There is also a call for technologies that may improve the livelihoods or generate time savings for households, particularly women, such as solar drip irrigation or mini solar-powered appliances.

“Our objectives are very clear and aim above all at promoting renewable energy for the benefit of the most vulnerable populations,” Léonide Michael, Director of ARESS said, following the signing of the co-financing agreements.

NIRAS staff together with a solar kit user and and ARESS employee.
Almost 65000

Projects looking for funding are required to bring at least 25% of the needed funds to the table. They are matched with potential investors and receive capacity building training on business development and how to secure environment, social, health, and security (ESHS) matters. They furthermore have the opportunity to participate on workshops on topics such as communication and gender and social inclusion.

In addition to household energy systems, the Fund is supporting two projects that install off-grid equipment and accompanying systems for essential public infrastructure, in the form of water treatment and solar water pumping facilities.. An administrative framework for operations and maintenance to ensure continuous delivery of critical services is also part of the deliverable.

Another focus of OCEF ‒ and the one that has attracted the most commercial interest  ‒  is decentralised generation and distribution of electricity via mini-grids or micro-grids for community or productive use. To date, 5 concession agreements have been signed giving operators the green light to bring off-grid electrification to 83 villages in Benin not currently served by SBEE, the country's national electricity service provider. Public consultations are ongoing to gather local community opinion on the upcoming installation of these mini-grids, particularly looking at the tariffs and conditions to be applied during the commissioning of these infrastructures. ASEMI.SA is a recent signatory of an agreement to develop and operate six mini-grids in Benin. This is a first both in Benin and the West African sub-region. It held its public consultations in September and November last year and recently started works for its project to build 30 km of grid to supply 10,000 households with electricity in Djolini and Gorobani, Effèoutè, Djabata, Wari-Maro and Woria in the communes of Kérou, Kétou, Savè and Tchaourou, respectively. ASEMI reps at the sigining of the concession agreement

A final area available for co-financing is support to business models that promote the implementation of energy efficiency measures among public institutions, households and commercial and industrial users. Energy-efficient appliances and equipment not only reduce overall costs for electricity consumers, but also reduce the demand for electricity from the grid.

Due to end in April, OCEF has been extended until June 2023. In the final stages of the project, the focus is on realisation of the main OCEF objectives, thus with a large emphasis on helping to ensure the completion of the mini-grids and microgrids.

By the close of the project, the Millenium Challenge Corporation expects to see:

Charlemagne Fandohan: the financial expert with a literary flair “Investing for Employment” Facility launches in Tunisia and Côte d’Ivoire